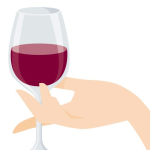 What is the difference between large and small production wines?

First let us look at the numbers. What is a Large production winery and what is a small (Boutique) producer?

A boutique winery is defined as a winery producing less than 10,000 cases of wine a year. One producer I represent uses 15,000-liter fermentation tanks, that is 3,962 gallons of wine! Which makes 20,000 bottles or 1,667 cases of wine. A large production winery has no set limit for production.

For example, the Kendall-Jackson winery produces 5 million cases a year! They are by no means the largest in the industry. For instance, Heritage Equipment Co. in California sells fermentation tanks up to 375,000 gallons. This will make 1,892,705 bottles or 157,725 cases.

It takes 32 tanks of 375,000 gallons each to produce 5 million cases of wine. Average fermentation time is 14 days for a dry wine, so you need several very large fermenters running to get all those grapes processed before the grapes spoil.

Now if you know anyone who has ever attempted a batch of homemade wine or beer, you are likely aware that there are a multitude of things that can, and often do, go wrong in the process of making an adult beverage at home. Multiply those problems by a million or so and now you are a large production winery with the same multitude of problems on a much larger scale.

Now to what makes a small production winery a better source for wine. When a batch of wine “goes off” at a small boutique producer, their reputation is on the line and they cannot consider bottling it. So, they have little choice but to dump it or try to sell it to a lower quality wine producer, depending on the issue that occurred.

However, when 375,000 gallons “goes off” you are NOT dumping that wine, you send a sample to your laboratory, to be analyzed. The winemaker then gets a response as to what needs to be done to ‘enhance’ the wine so that it can be sold.

In 2016 Chris Null an investigative reporter published an article in WIRED Magazine on the additives used in making wine. He found some 200 different compounds were commonly used to ‘chemically adjust’ a wine. Some as simple as sugar, or tannins and oak. Among the other compounds some need “special training” to handle them.

All of this is legal and since the FDA does not regulate alcoholic beverages it does not show up on the label. Finding the true boutique producers is the challenge. Some large producers feature some ‘small batch’ production wines such as Beaulieu Vineyards George de Latour Cabernet, and they are sold at premium prices.

This is a popular practice with many well-known producers. However, a true boutique producer can offer very well-made unadulterated wines at very affordable prices, normally in the $25 to $50 range.

A small cost difference between large and small production wines.

Hand crafted wines for a mere $5 to $15 dollars more than a mass-produced wine at $20 a bottle. I work with a few hundred of these producers in 13 countries and many clients of mine swear that even if they “accidentally’ drink a whole bottle they have no regrets the following day.

In this case the old adage, “you get what you pay for”, certainly applies.

If you want some personal wine recommendations on large and small production wines from a knowledgeable consultant, (um, me!) contact [email protected], or call me at (866) 332-9463. Learn more about me by clicking here!

I’ll learn your specific wine preferences and budget, and never try to convince you to buy something you won’t fully enjoy… and if for any reason you don’t, I’ll take back the empty bottle (actually. you can keep it) and send you something else to replace it!

What is the difference between large and small production wines?